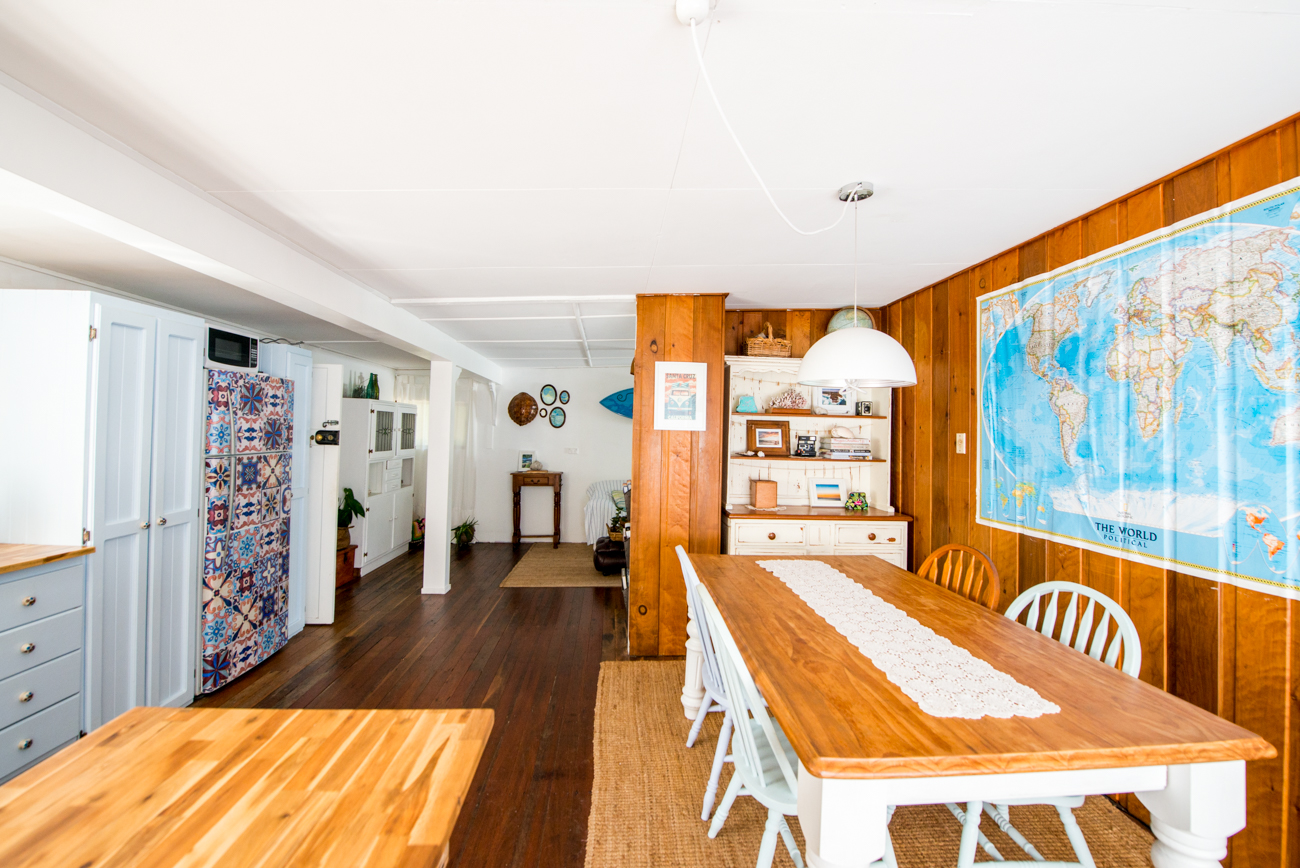 Let me tell you a little bit about the history of this house.

Situated on Claytons Road, in Amity, on about 600sqm

It was built in 1959 by the owner – Col Bennet and his builder mate, it is made from the materials of their first house which was located on Kindara Street, right on the water, and when erosion threatened eventually succumbing – with Amity loosing three streets and a racetrack – whaaat, I know right!

There is now a long rock wall as a deterrent for the erosion, however it is slowly but surely creeping – Somewhere out there is is a forgotten racetrack. 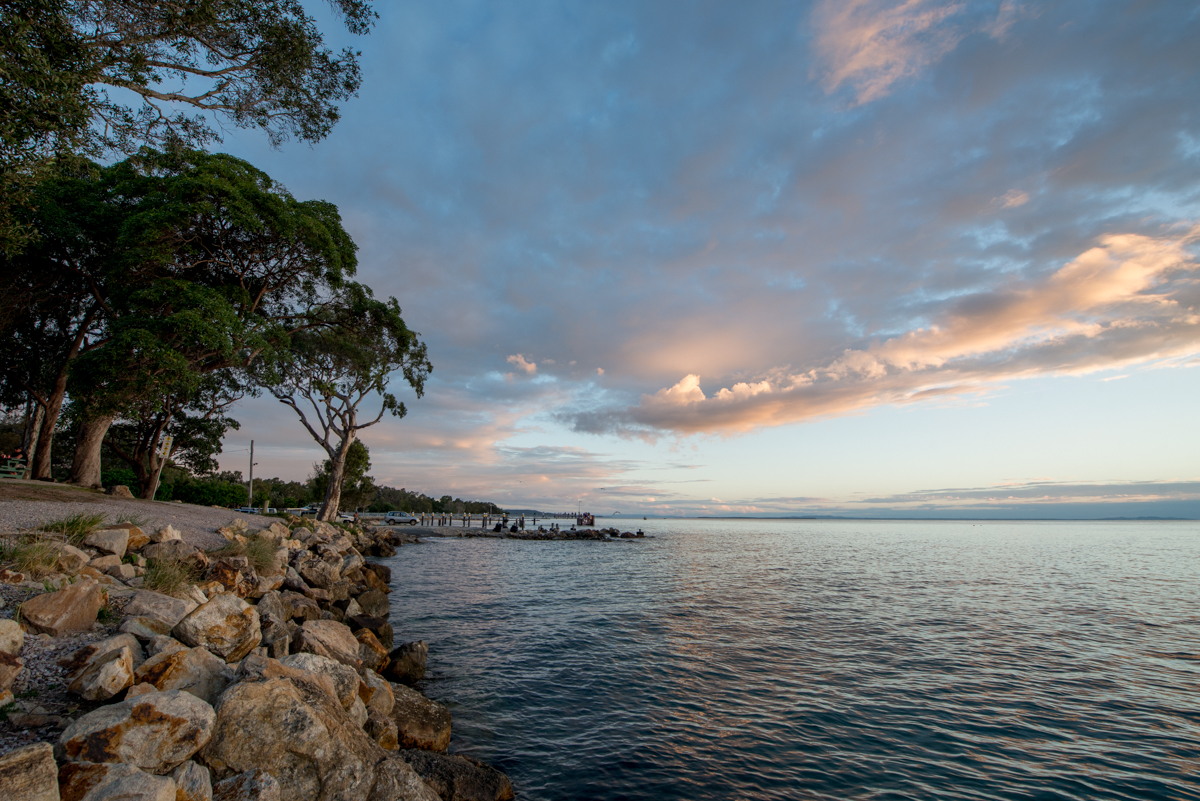 It is based on the design of Col’s builder mate’s house, so our house has a cousin house in Amity somewhere which is pretty cool, (I have walked the streets looking for it but so far no luck, so if anyone know’s of the house which was called ‘Dun Workin’ then let me know)

The timber inside has been milled from island timber, just around the corner at the local Amity timber mill, is that not just the coolest thing, some of the timber in the house is so old and hard, it’s better then the steel post they put in to hold up the roof)

This is the dining room and looking back into the living area. We kept the natural look for some of the local timber walls, I love it. You can see in the After shot where we removed a wall to put in the new kitchen. We kept the timber shiplap (actually we kept most things to reuse later) and it has popped up all over the house – mainly lots of shelving) 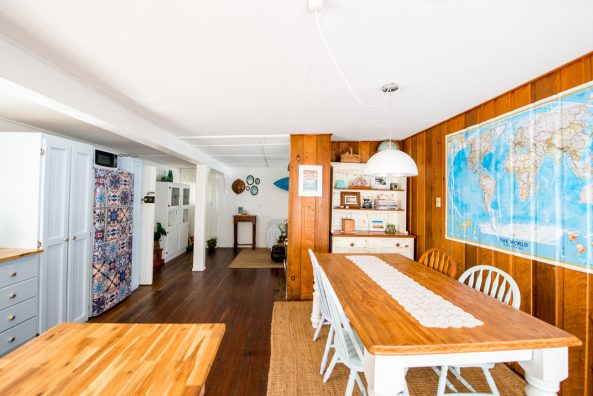 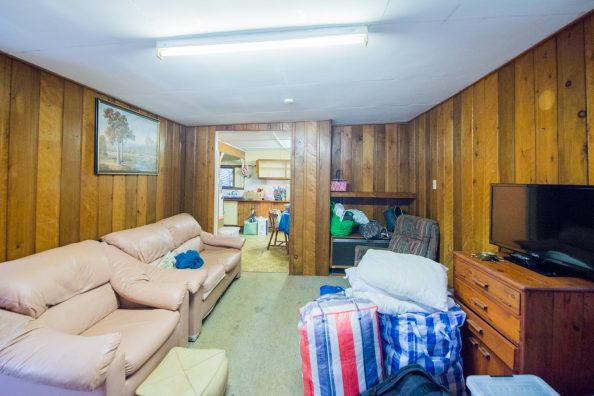 As time went on and Col and his wife Dot’s family grew they expanded and changed things, putting a caravan in the backyard for Dot’s mum (that we now have restored to use as an AirBnB) upgrading from the cold, backyard shower out of a drum run by a 100 stroke power as well as the outside ‘dunny’, and the little tin smokehouse where Col would smoke his mullet is still there… not sure what I am going to do with that yet.

By the time we moved in, it hadn’t really been lived in for the previous two years and it was full of their furniture and stuff, the gardens were twenty years of overgrown greenery – they look really good in the photos but don’t be fooled, those are bromiliads and they are a personal spa bath for a mosquito. And it all had to go, so after a couple of garage sales, many trips to the op. shop, Straddie Buy and Sell, And 40plus box trailer loads to the dump here on the island and a few times over town, many, many hours (and no doubt, some tears) we cleared the lot.

Stu taking up some carpet… and vinyl… and timber chipboard 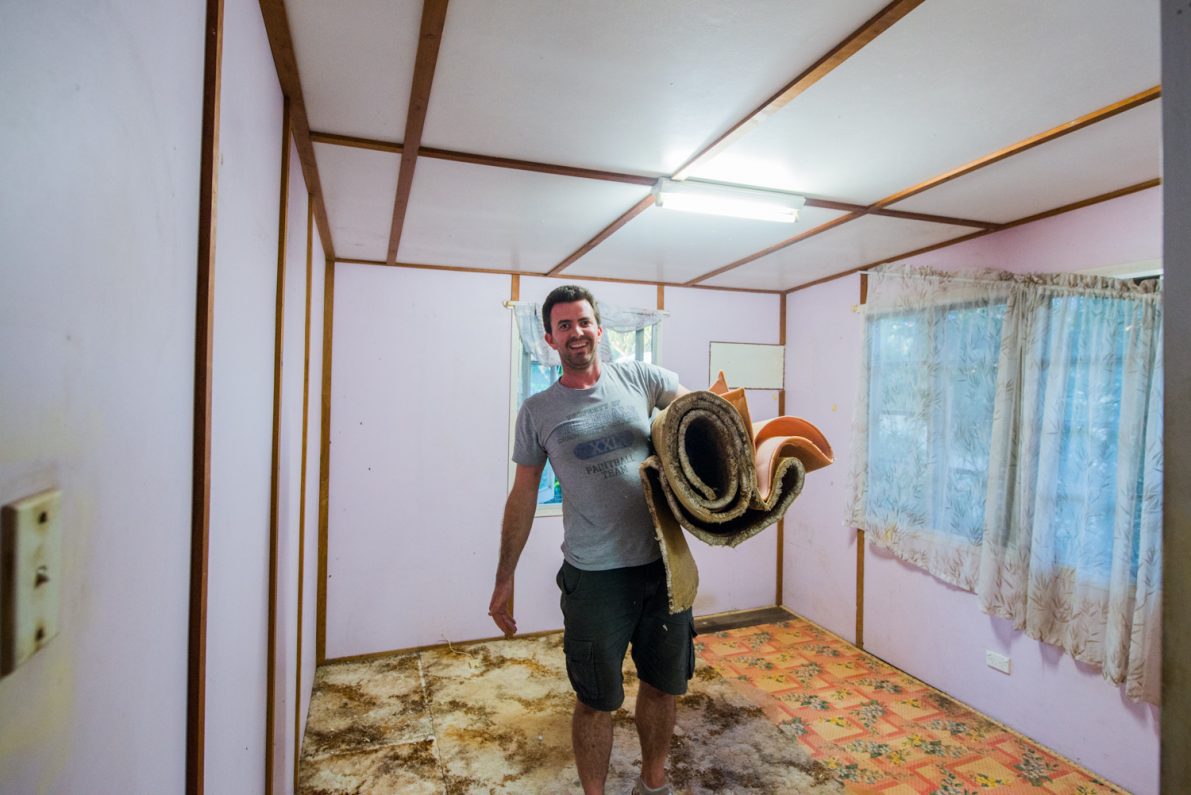 We’ve pulled up the carpets and vinyl, replaced broken boards, sanded, varnished the floorboards (and uncovered some pretty incredible timber floors) knocked down walls (and found a cement shower in the cupboard, whaat!) moved and built-in a new kitchen, re-stumped the side of the house, built a fence, painted everything, paved the backyard, built a laundry, put in a sub floor and floorboards and built in the mudroom restored louvres, replaced the kitchen window, patched the roof, chopped down a tree that was growing out of an old watertank, redecorated bathroom, restored furniture, built storage… pfew

The bedroom that we use as our main room. 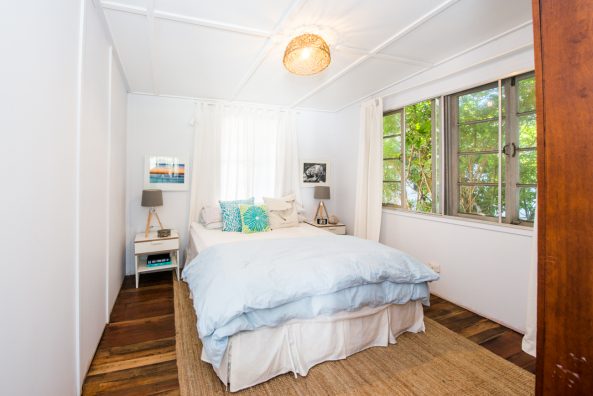 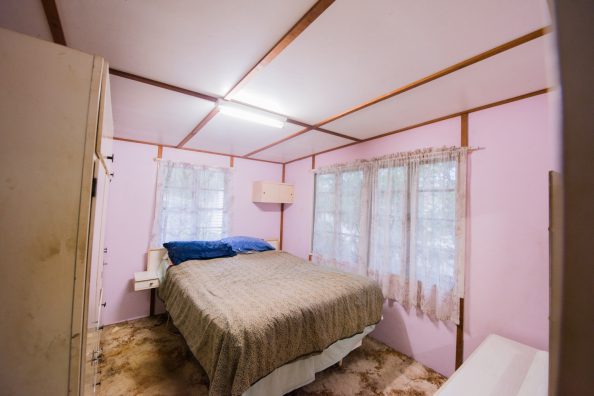 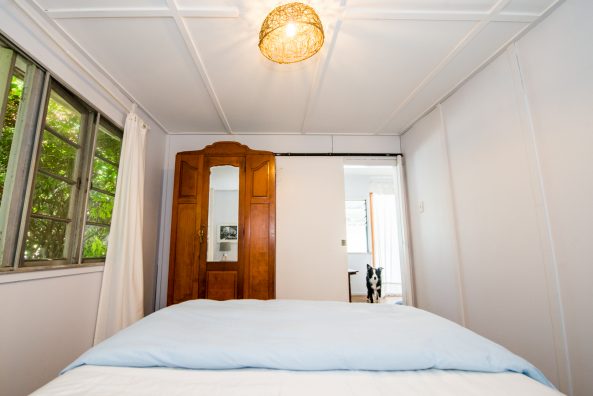 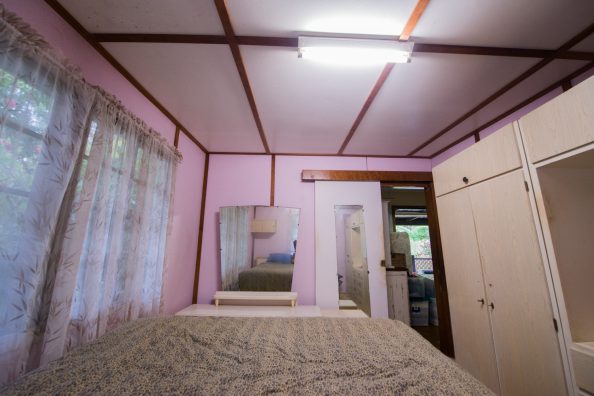 This is the spare guest room 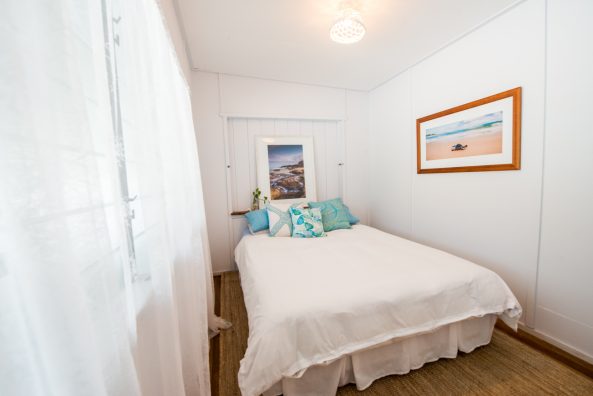 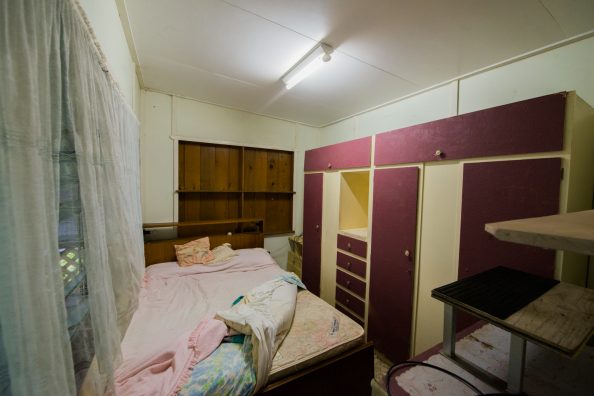 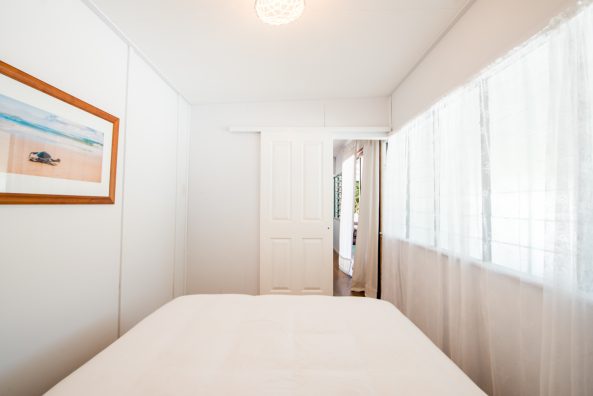 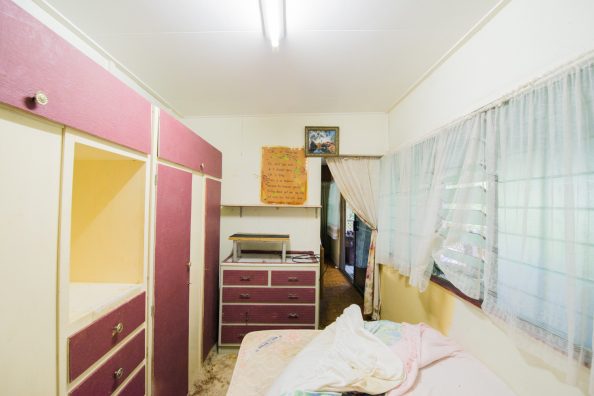 So it is safe to say that for those couple of years, restoring this house was a full time job, whenever we weren’t working on our business or writing our book, we were renovating (a couple of times we were forced to move out into our camper trailer on the front lawn, so yep, that was us making our dinner on the front deck)

At times we thought we were never going to finish – and in all honesty, we aren’t finished (I know you hear this all the time from people who are doing the same) but it is true, you are never really finished when you renovate an old house, but for now it is finished enough.

So lets do some other shit now.