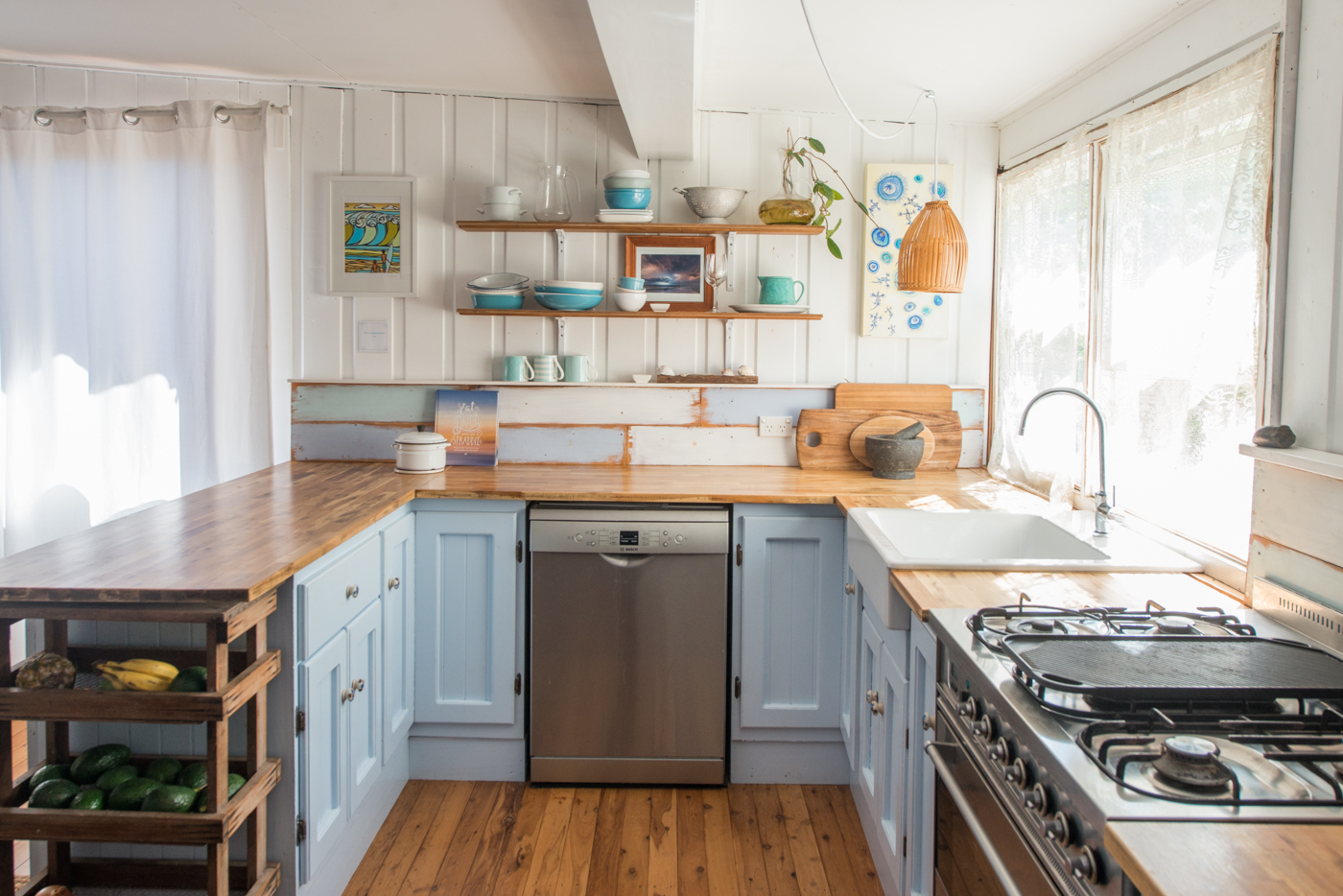 People always comment on our kitchen renovation, good comments, comments that make me feel all warm inside, and I accept that praise because I really love our kitchen as well.

As we were going through the process I would look at the space where I know the kitchen would be  and think that we were never, ever going to get there, or as we sat on the deck cooking our dinner with an electric fry pan (while camping on the front lawn, yes we did) and feel as though we were were the biggest losers alive. But eventually it actually happened

This is a Before and After photo of the space 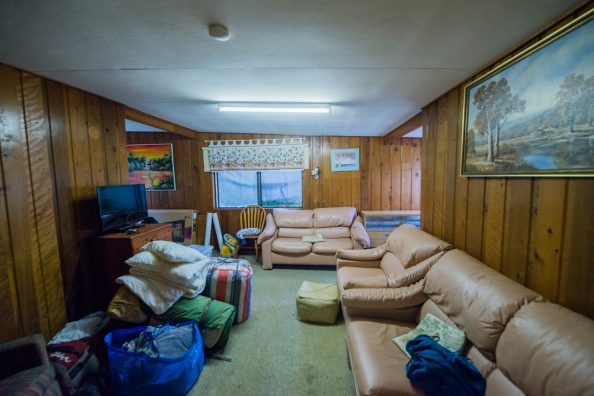 We had decided pretty early on that the location of the kitchen, as it was when we moved into the house, wasn’t suitable and we were more then a little weirded out that you walked through the front door and straight into the kitchen, so we relocated it and built in a totally new (well new for us) kitchen.

We pretty much did all of the work ourselves, except we did need to get professionals in so, as a typical self renovator, we were looking at whatever ways we could to save on money. And we got pretty good at recycling things. So much of the house is something that started life as something else.

Anyway, we ended up doing this kitchen build for less then $4500 (yes, you read that right)

I know, we did pretty well with it hey.

Here is a bit of a breakdown, so you can see where we spent the money. 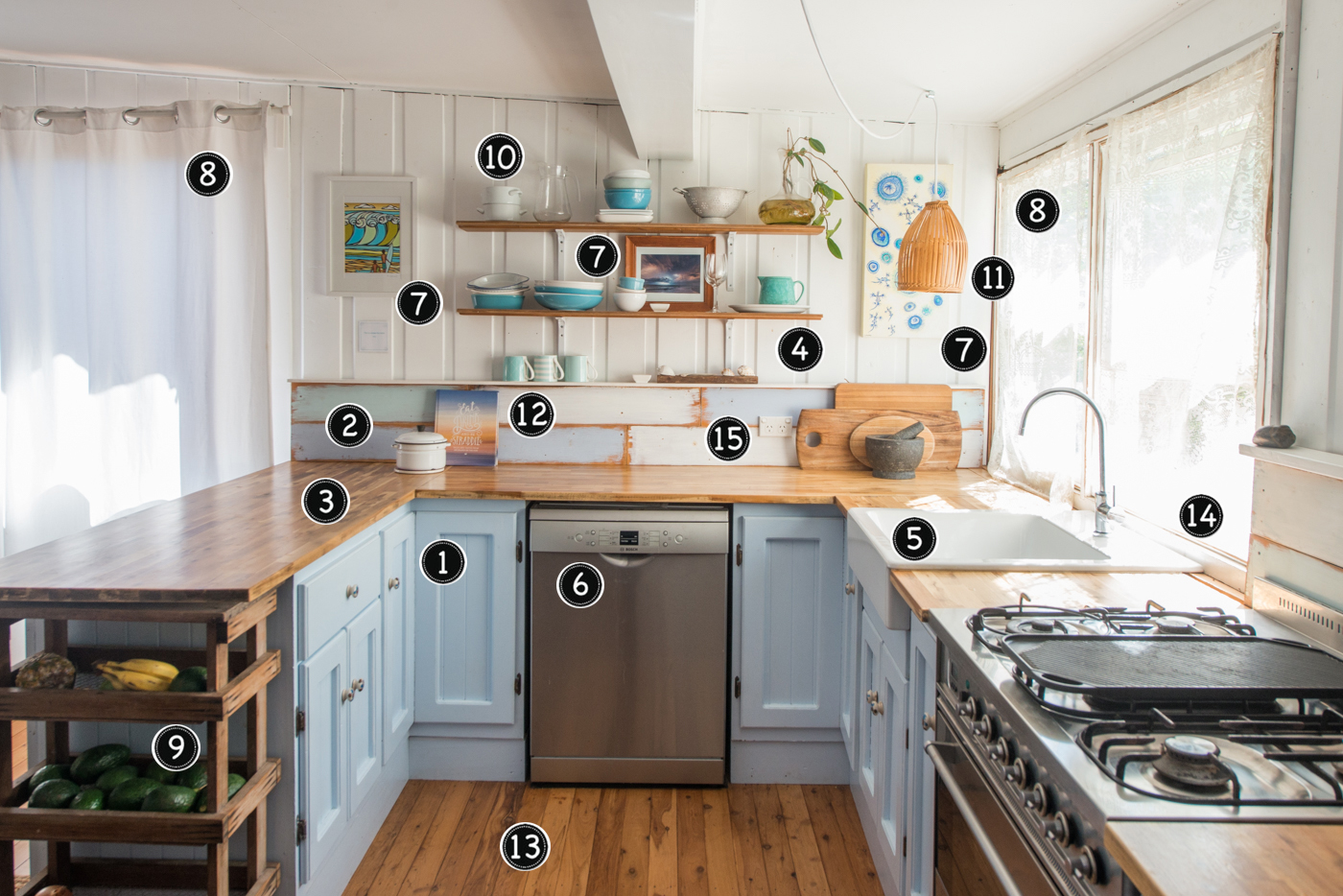 1.Kitchen bought through Gumtree from a house in Rosalie, Brisbane, where the guy was selling it because he was getting a new one installed. It came with the Ilve oven for $1000, we sanded back the cupboards, painted them and then reconfigured the kitchen to suit the space (there were cupboards left over so we used them for the outside laundry) the cool blue patterned ceramic handles came with the kitchen. including the ferry trip, paint, sandpaper etc. total $1,300.

2. Backboards these are which what was the bench tops of the Gumtree kitchen and just sanded back and painted. $0

3. Benchtop just an ordinary timber slab from Bunnings. including varnish. $265

4. Shelving shiplap taken off the wall we removed from the now kitchen, brackets from Bunnings. $4 each. total $16

5. Butler’s Sink from Ikea and hardware came with the Gumtree kitchen. $249

6. Dishwasher bought from Harvey Norman. About $800.

9. Veggie Rack Old homemade drying rack salvaged from out in one of the back sheds, can only image it was used for drying fish on and made from house cut offs.

10. Crockery found in many an op shop around the place, except for the strainer – which came with the house. between 50c and $2. total $15

12. Our book Eat, Drink and Be Straddie. available in some awesome local shops as well as online here $50

15. Electricity/Plumbing one of the jobs we did not do ourselves, instead we have had a couple of different qualified local electricians come in and do the job I guess for the kitchen stuff it would have come to about – electrician $400, plumber $600. We also had an engineer and a builder come in to help us with the building of a steel beam to hold up the roof after we knocked down a wall – I haven’t included this in the price of the kitchen.

Also, not seen in this photo (but you can see in the top image) is the fridge that I covered our old fridge with adhesive tiling. $60.

I will pat us both on the back for that effort.